Origin’s of Alf’s Imperial Army
War as an Art Form
Whilst at Melbourne University, the Wizard began to apply the principles emerging from his new cosmology which he was teaching there (see later articles on this site), to found an army. This was done with the aim of reducing the hatred and violence being introduced on the campus by the various left-wing activists of the time. 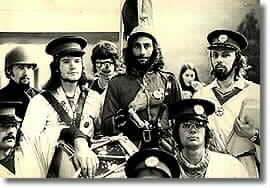 The founding fathers of ALF’s Imperial Army 1973
The catalyst for this decision came in 1972 when the University Pacifist Society voted to give student money to the Viet Cong! Long an admirer of Viktor Frankl’s “paradoxical intention” therapy and convinced that, since the student leaders were becoming unintentionally paradoxical out of sheer hatred of the USA, the best way to provide therapy for the students as a whole was to form a “paradoxical army” that fought for fun.ALF’s Imperial Army was named after the university reform movement he founded earlier at The University of NSW in Sydney and was consciously part of the ongoing Fun Revolution. An Imperial Army was designed to be the most radical departure from conventional student politics imaginable. The colour and style of imperialists appealed to the Wizard’s aesthetic tastes as a Living Work of Art. He regarded anti-imperialists as uncouth, puritanical, arrogant, argumentative and, worst of all, shabbily turned out in their khaki battledress and Che Guevara berets.

All Not Fair in War
He drew up a simple set of rules for non-violent war which emphasised invective and sabre-rattling and forbade the use of any weapons likely to cause injury. The writing of ultimata became an art form almost as important as history-writing aimed at proving that ALF’s Army was always right and had of course won the last battle (whatever may have transpired on the battlefield).

The enemy was anyone willing to fight A.I.A. and to abide by Alfs’ Articles Of War. Needless to say, no left wing pacifists or religious fundamentalists were willing to fight them. Puritans take war and revolution (and themselves) very seriously. However the Engineering students at Melbourne University had a history of fun-loving activities and made an excellent enemy. The snag for AIA was that their enemies always outnumbered them, often by as much as ten-to-one.

The sight of so much frenzied mock violence with charges, counter-charges, flour bombs and buckets of water being hurled in all directions made far better photographs than those of dreary, bureaucratic student radicals throwing marbles under police horses’ hooves or struggling to occupy some rival bureaucrats’ offices.

The student masses, constantly being urged on to violence, for no obvious reason, by their leaders (and their lackeys the student newspaper staff) much preferred to watch or participate in exciting and non-violent ALF’s Imperial Army battles than to become involved in yet another office occupation or dull, down-town “demo” against “American Imperialism.”

The only snag was they would never see their pictures in the student newspaper or major city papers, who much preferred to publish pictures of ugly violence for a “good cause” to those of beautiful, controlled, existential aggression. 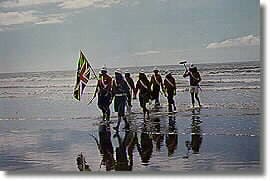 The Army Conquers New Zealand
In 1973, in preparation for his attempt at apotheosis (more details later on this site), the Wizard was preparing to move to New Zealand. He sent ahead one of his officers, Colonel Catford, to prepare the way. The Colonel organised and led the first regiment in Canterbury and battles were fought on the topographically excellent terrain of the recently-moved university. 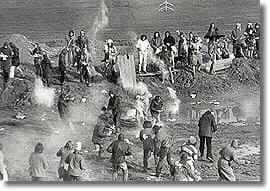 The first battle in New Zealand August 1973
The Wizard himself arrived in 1974 and the battles began to move away from the increasingly conformist university campuses to other locations, and other enemies came forward to declare war on ALF’s Imperial Army. At the same time uniforms began to develop towards the ideal reached by the British Army in the late 19th Century and shown so attractively in the film “Zulu” which was released at this time. In the early days pith helmets had been improvised from plastic toy police helmets and white shirts rather poorly dyed red.
One day, soon after his arrival in Christchurch, the Wizard happened to be shopping in a dairy when he looked up and to his amazement saw an unknown ALF’s Imperial Army Regiment on their TV screen. They were dressed in regulation uniforms and were battling the usual large mob of ill-dressed enemies. A student from Massey University in Palmerston North, Andrew Smith, had simply picked up the idea for the uniform and rules of war and had gone ahead on his own.

Meanwhile the indefatigable Colonel Catford had moved to Wellington and founded yet another Regiment there.

At the same time, Wayne Everson, a student at Otago University in Dunedin with a strong interest in the visual arts, founded the Third Regiment. His improvements on uniform quality and design and the improved training methods and mobile campaign equipment devised by his trusty lieutenants, Alan Larsen(Algy) and Doug Scoe, were first seen during the invasion of the North Island by the South Island regiments and were soon copied by the others. Medals with distinct ribbons were struck for various campaigns and for heroism, and regimental messes complete with bar and imperialist decor sprung up all over the country.


It is important to point out here that there has been no connection between ALF’s Imperial Army and the Society of Creative Anachronism (SCA) as the latter believe in contrasting their own activities with “real life”, a concept which the Wizard believes is greatly over-rated and over-respected. Most ALFs restrict their medieval fantasies to role-playing games.

There is more connection with the groups that re-enact famous battles of the past, particularly the Sealed Knot in the UK. Many members whilst in Europe join this group and participate in their battles. There is still the same difference in their philosophical approach as to what represents “real life”.

There is not space enough here to list all the enemies that have deliberately provoked war with ALF’s Army over the years. Their most common characteristic until recently has been their scruffy appearance, their inability to compose stylish ultimata and self-glorifying histories, and their superior numbers.

The Glorious Record of the Past
No-one who was present can forget the battle at the time of the NZ General Election in 1978 when the Imperial British Conservative Party candidate (see forthcoming article on this site), Tinkerbell, led the army against the massed forces of the Labour Candidate, Anne Hercus. Other memorable battles include the traumatising Battle with the Nudists at their annual camp, the attack on the Maoris at the Seven Canoes Marae to rescue a colleague, the Invasion of Otago University, the Battle on the Ice at the Leith River, The multiple-interactive battle with the school boys at Marlborough Boy’s College(Blenheim), the terrifying encounter with the schoolgirls of St Margaret’s, the Battle of Hagley Park when the Wizard was rescued after three days of captivity by terrorists, the marine Battle with the Pirates on Lake Victoria, the Battle with the Police at Invercargill Showground, the Capture of Coronet Peak and the Attack from Lake Wakatipu at Queenstown, the Defeat of the Mudmen at the hippies’ Rock Festival at Punakaiki, The Festival of War at Golden Bay, The Siege of Avalon TV Studios in Wellington by the combined North and South Armies, the battle with film ex-extras at Wanaka, the Khan Wars, etc. etc.

Only by research into the yellowing back numbers of The Imperial Illustrated Gazette could anyone compile a more or less complete record.

The Mother of all Armies
During the 1980s, defaulters from ALF’s Imperial Army and imitators began to form rival armies all over New Zealand. The most notable and most active has been the McGillicuddy’s Flying Claymores which started in Hamilton and spread throughout the country as part of the trendy anti-Anglo-Saxon Celtic Revival. They claimed that the throne had been usurped by the Hanoverians and the true monarch of New Zealand should be a shadowy figure of their own choice, Prince Geoffie.

The McGillicuddys set new standards as an enemy, being most attractively turned out in kilts and bonnets, skilled in the art of dying gloriously, employed witches for spells, and were in even smaller numbers than the ALFs. The McGillicuddy Clan also formed a political party to contest general elections. Three or four small private armies appeared in Dunedin which also produced many of the best officers in ALF’s army. The Rough Riders of Christchurch, the Black Macs of Blenheim, the Fighting Firemen of Nelson and Aunt Fanny’s Sewing Circle of Takaka are only a few examples of the resurgence of the heroic warrior spirit in New Zealand. Alas almost no interest in non-serious warfare has so far been shown in Auckland. Most people outside the metropolis regard Aucklanders as singularly devoid of irony and humour.

The Glorious Future – the Invasion of America
Having completed their mission to bring properly organised and artistically attractive war to New Zealand, members of ALF’s Imperial Army have come to an impasse. Numbers are declining, the style and élan have been replaced by formalism and attempts have been made to bureaucratise the regiments. At such times in the history of human affairs great leaders have found it necessary to attack a foreign power.

Since the 1970s the Wizard has kept reminding his army that they must not forget that their great mission in life is The Invasion of America. The master plan is to recruit heavily in Canada and then march South over the border.

The Aim is to bring the Yanks back into the Empire, to restore Queen Elizabeth as their legitimate Head of State, to replace their President with a Governor General, to re-establish the Church of England as their state religion, and to secure an apology for the misrepresentation of King George III’s character in The Declaration of Independence. Whether or not the British will burn the White House down for the third time will depend on the Americans’ genuine repentance for their government’s collusion with the Soviet dictator at the Yalta and Tehran Conferences to destroy the British Empire.

This web site is now ready to facilitate the recruitment of traditionalists and loyalists from all over the British Commonwealth, especially from those Canadians horrified by their absorption into the USA. We also expect to gaining allies from discontented Confederate States “rebels” with long memories. Volunteers keen to participate in this noble enterprise should contact the Wizard by e-mail as soon as possible.